Poppers: Drug or not drug? Legal or illegal?

Let’s start with the question everyone is asking,

Is Poppers legal in France?

The answer is yes, however this has not always been the case; So here is a little timeline of the path of the little magic vial in French legislation 👨🏫:

💨Free sale as no legal status

⛓1990: a Decree prohibits the sale/distribution of pentyl and butyl nitrite-based Poppers

The French market therefore uses propyl nitrite, which is not covered by the ban.

⛓ 2007: a Decree prohibits the manufacture and distribution of Poppers based on alkyl nitrites (propyl,amyl,butyl,pentyl), treating them as drugs

2007: Repeal of the 1990 Decree, which becomes irrelevant, since all poppers have just been banned

2007: A European Directive bans the use of Butyl Nitrite, regardless of its use, because of its danger to health

⭐️ 2009: cancellation of the 2007 decree, allowing propyl and Pentyl-based Poppers to return to the market “legally”

⛓ 2011: a Decree again prohibits the manufacture and distribution of Poppers, this time equating them with narcotics

⭐️ 2013: Cancellation of the 2011 Decree: all poppers are therefore now allowed to be manufactured and sold, except those based on butyl nitrite.

As you will have understood, the history of poppers is rather chaotic as far as legislation is concerned, but recent decisions (based on scientific studies) have finally vindicated the little magic vial 🧪 and now allow it to spread the joy legally 😉 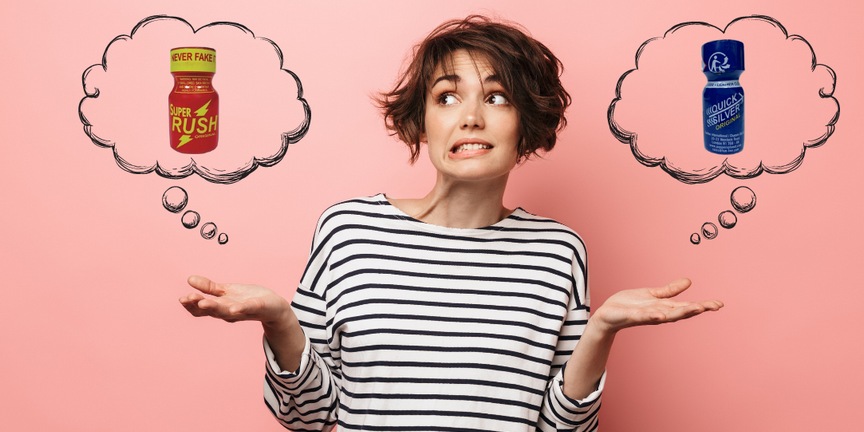 Is Poppers considered as a drug?

First, what is a drug?

A drug is a substance that is capable of altering neuronal abilities but, more importantly, of causing physical 💪 or psychic dependence 🧠

What about poppers then 🤔

Well dear friends, poppers is not considered as a drug for several reasons:

It has absolutely no effect on the brain, it only has a vasodilator function 🩸

It is this blood vessel dilating effect that causes all these effects that make Poppers ideal for getting drunk and having fun:

Poppers is not addictive, numerous medical and scientific studies that have dealt with the subject have attested to the absence of addiction in users of this product 😉

Does poppers have any side effects?

All products have side effects; Therefore, it is important to refer to the labeling to make sure you know the risks of using your Poppers;

Nonetheless, the side effects of poppers are quite benign, and mostly short-lived; As for the more serious accidents, they are often related to practices not recommended, or even strongly discouraged by the manufacturers;

In short, Poppers is not illegal, is not a drug either!

Just an ally to have a really good time, if consumed in the right way! (Like all products after all 🔬)

In case of an accident, or if someone is not feeling well after taking Poppers, we remind you of the useful info: